Deb is a female striped damselfish and a minor character in the 2016 film Disney's Finding Dory.

Deb is a slim fish with a deep blue and white striped body. She has a tall dorsal fin that runs down her back and she has a heart-shaped tail. Her eyes are blue.

As seen in Finding Nemo, Deb is very friendly and kind. She is optimistic and poses as an "aunt" figure to Nemo, promptly introducing herself and greeting him warmly when he arrives. She is also tenderhearted and becomes worried fairly easily, as seen whenever Nemo is in danger. Deb may be delusional, as she seems to think that her reflection is her sister, whom she calls Flo. 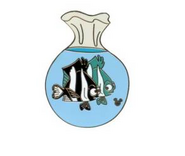