At Epcot in Walt Disney World, she is the star of Ellen's Energy Adventure, a theater show. She also played Martha Alston in the 1996 Touchstone Pictures film Mr. Wrong and Ellen Morgan in the ABC TV show Ellen.

She starred as Dory in the 2003 film Disney's Finding Nemo and has stated that she is thrilled to be back for the sequel. 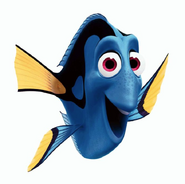