Finding Dory is a 2016 computer-animated film produced by Pixar Animation Studios and released by Walt Disney Pictures that anyone can edit! The film is fairly new, so this wiki is still in development. We have 67 articles so far. See a page that we don't have? Join our Wiki and help us expand!
Taking place a year after the first film, Dory suddenly recalls her childhood memories. Remembering something about "the jewel of Morro Bay, California", accompanied by Nemo and Marlin, she sets out to find her family. She arrives at the Marine Life Institute, where she meets Bailey, a white beluga whale, Destiny, a whale shark and Hank the octopus, who becomes her guide.

Did we forget something? That happens a lot with Dory around. To create a new article, type the title in the box below. 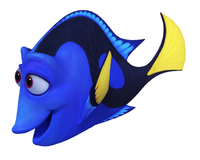 Jenny is a female Regal Blue Tang fish and the one of two tritagonists of the upcoming 2016 film Finding Dory.

NOTE. We are officially affiliated with the wikis below:

To read more about Disney and Disney/Pixar works, visit the Disney Wiki.

Retrieved from "https://findingdory.fandom.com/wiki/Finding_Dory_Wiki?oldid=5476"
Community content is available under CC-BY-SA unless otherwise noted.